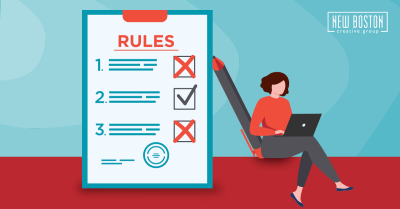 Fashion trends. The whole New Boston office can confirm I’m oblivious when it comes to these, but even I’ve noticed the gradual trend toward more casual dress over the years. Picture the floor-length lace of the Victorian era, or the ’50s when heels and matching purses were standard dress for a trip to the grocery store. The pendulum has been swinging to the casual side for a very long time, and it seems the pandemic only accelerated its trajectory with so many working from home. Interestingly, the same goes for grammar.

Juxtapose the dialogue in any Shakespeare play with that found in a 19th century novel or letter, and then with a classic movie such as Casablanca. Continue on throughout the decades and it’s clear the written — and certainly verbal — communication conventions we consider acceptable today wouldn’t have flown then. Sometimes I think about how that would play out if I suddenly found myself transported to another time.

The styles, peeves and preferences of professional editors or writers are incredibly diverse, but there’s one thing we all hate: two spaces after a period disparaging comments about “grammar police.” These types do exist, but the vast majority of professional writers and editors understand and appreciate the nuanced and ever-changing nature of language and its role in society. Or at least we recognize the absolute futility/counterproductivity of demanding everyone conform to a certain set of rules, along with the many benefits of meeting audiences where they are. This is especially true in marketing where the No. 1 goal is to grab — and keep — the attention of an audience who may not care about the topic you’re delivering, and may actually be looking for something else altogether.

Don’t get me wrong: In no way have we entered the age of grammar anarchy (grammarchy?). Correct spelling and grammar are vital when communicating with your audience. We have our tried-and-true, time-tested rules for many reasons, all of which boil down to creating clarity, consistency and credibility. Glaring errors will give a bad impression of your business or product, so correct spelling, punctuation, subject-verb agreement and a few other non-optional standards remain a priority. At NBCG, we use the Associated Press Stylebook and Webster’s Dictionary as official guides, along with a few internal preferences and a couple other guides. All are lower on the style hierarchy than the house style of our clients. So you see, flexibility is key. Even the AP Stylebook staff meets once or twice a week to discuss potential changes — which it makes regularly — so pay attention! 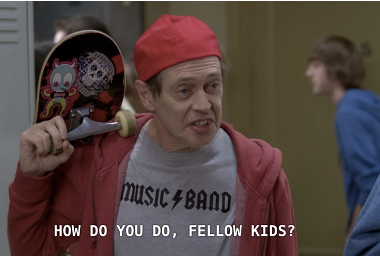 There are specific writing rules for websites, technical guides, news publications, legal documents, advertising and more, but applying them in the wrong place will get you nowhere. It’s about assessing the purpose and audience of the writing. The truth is, most of us in the biz derive exactly zero pleasure from shaming others for breaking a so-called rule, and often we’re too busy cringing at others for pedantically attempting to enforce a hoity-toity rule that was booted long ago. (Hop on over to There’s a Name for That: Copywriting Skills You’ve Used All Along to learn how reduplication — hoity-toity, handy-dandy, etc. — are used in communications today.)

Here’s a short list of rules that come to mind:

Rules You Thought Were Rules but Were Actually Never Rules

Again, there are times when more formal writing is called for, and those circumstances may require us to bring some of those rules out of retirement. But (see what I did?) for the most part, you can relax.

If you have a need for error-free content that’s artfully tailored to your audience and purpose, give us a call! We can help you craft compelling copy for web, print, email, social and more.

P.S. If you’re serious about avoiding run-ins with the grammar police, do consider proofing your salty social media takes before hitting send.