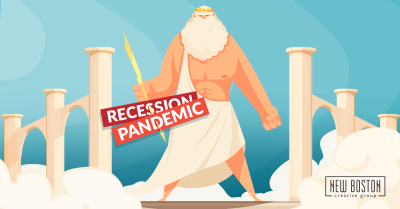 When 2009 started, New Boston Creative Group had been in business a little under three years. We’d grown pretty fast in a short period of time and felt invincible. Anyone familiar with the Greek tragedies knows what happened next. A worldwide recession will knock anybody off their personal Mount Olympus, pronto.

In January 2009, the phones stopped ringing. Our revenues that year were half of 2008. Eventually, we had to carry out our first layoffs. On top of everything else, our landlord informed us that, literally, the roof was falling in on our heads. Defective trusses. We had to vacate for several weeks midyear and 11 of us crammed into 1200 sq ft and made the best of things until repairs wrapped up. Oy vey.

Fast forward to March 2020. I don’t need to recap that for you. We very quickly dredged up the lessons we learned in 2009 and went into survival mode. Which made sense, but 2020 ended up playing out very differently than 2009 did.

If you survive, the toughest lessons are usually the best. Experience can be a harsh teacher but it’s even worse to not to learn anything from it. Get through the tough stuff, don’t forget how you did it and pull those lessons out when you need them.