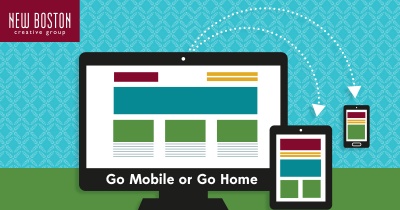 Yeah, yeah, yeah. I can see you rolling your eyes. And I feel your pain. I know that the last thing you want to do is redesign the website you felt so proud of in 2012. I mean, you paid a lot of money and you want that investment to last for years and years, right?

Well, it’s been years and years. Mashable declared 2013 the “Year of Responsive Web Design.” So as we approach 2017, if your site hasn’t been retrofitted or redesigned so that it automatically adjusts to the size of the browser window on any and every device, your digital presence has gone the way of chalkboards, milkmen, and flip phones.

You are officially old school — and losing money daily.

If you think none of this applies to you, then stop and think about your customers. One of the fastest-growing customer bases, the Millennial generation, is gaining wealth and buying power, and moving into key decision-making roles in the workforce. You can no longer dismiss this important demographic.

And don’t think your Facebook page is enough to save you. Gallup says that only 7% of all consumers and 11% of Millennials use social media as a source of information about retailers’ products and services. Of that percentage, Facebook is one small component, along with Twitter, Instagram, Pinterest, Snapchat, LinkedIn, and more. Amid all the noise, retailers’ websites are still the number one place people go to make buying decisions.

The retail landscape is being completely transformed. You can either evolve or become extinct.

So, what would a mobile user think of your website? Can your site be easily read and used on a smartphone? Does it look good on a tablet? If not, then boom! You just lost some money.

If your website looks like a teeny, tiny, shrunken version of itself crammed onto the screen of a smartphone where a user can't even press a button, instead of like a bright, inviting, readable, dynamic, visually appealing, scrollable page, then your business is in trouble.

Make it a priority for 2017 to get on the mobile bandwagon. New Boston can guide you through the process, and get you up-to-date.