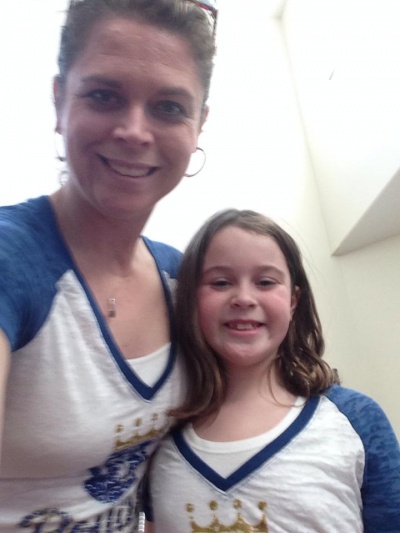 Between my grandparents living in the metro area when I was a child, and my dad living there for part of my teen years, I spent a lot of my youth in KC. In fact, I enjoyed my time in the City of Fountains so much as a kid that I always envisioned that it would be in Kansas City that I’d make my life as an adult. Kansas City was everything Manhattan in my youth was not — a bustling metropolis of museums, restaurants, shopping, concerts, amusement parks, and professional sporting events. My home city was a glamorous alternative to the town I was raised in. As a kid, I wasn’t concerned with the downsides of living in the metro — things like traffic, crime, pollution and racism. My sugarcoated view of KC was based on experiences I’d had on vacations and long weekends.

After we graduated from K-State, my husband and I moved just south of Kauffman Stadium in KCMO. We drove by the stadium nearly every day; it was the major landmark to use when instructing people how to find our apartment. Those who know the city know the stadium is in kind of a rough part of town, but we chose to move to this specific apartment complex because the rent was just right for two kids starting out.

Those early years of our marriage in KC were exciting — we spent nearly every weekend at the Plaza, and enjoyed the close proximity to all the amenities the city offered. We were young, in love, and enjoying being away from our families for the first time. (We also had our first real jobs, so we didn’t quite know what to do with actual paychecks.)

But my rosy view quickly began to wane as the city became my daily reality. People were murdered at my local QuikTrip, the branch bank my husband worked in was robbed, traffic jams delayed everything, and some dude at a nearby correctional institution kept trying to call us collect. There were a lot of bars on the windows between our low-budget apartment and The Plaza, and we saw more homeless people daily than we could count. The reality of living in a major inner-city metro turned out to not quite be what this small-town girl had envisioned.

(Funny side story: On Friday nights in 1999, the Royals had fireworks displays after home games to try to get more families to attend. The first Friday night I lived there, I was home alone when I heard the sound of the exploding fireworks. This naïve white girl from Kansas panicked because she thought she was hearing machine gunfire!)

After two years, we moved to the ‘burbs, and a few years after that we were given an opportunity to move back to Manhattan. And thus life came full circle and the small-town girl ended up back in her small town.

But there will always be a part of me that thinks of Kansas City as my second home, and I definitely feel like “my” city is playing tonight in the final game of the World Series. And while before last week I hadn’t watched a Royals game in about a decade, I’ve felt very invested in each game. I’ve made it a point to share this experience with my kids, much like my Dad got me pumped up to watch the 1985 series when I was 10. (I can still name most of the ’85 roster — and I thought Bret Saberhagen was so cute!)

I want this group of nearly no-name players to win because they represent “my” city — a city with lots of strengths, but many challenges it is working hard to overcome. And like this team, Kansas City is made up of comeback kids! The city has made a lot of progress through redevelopment projects in the last 15 years, and hopefully those efforts have cleared the way for others. Last summer, the Huffington Post named Kansas City the “coolest” city in America, which shows how much progress has been made.

So while I may be a fair-weather Royals fan, I’ve always been a Kansas City fan. And I’m proud of all the progress it has made. It’s been so exciting to watch the city’s reaction to being thrown in the national spotlight. I’ve loved seeing the fountains run blue, the buildings sporting their blue lights, and photos of people I’ve known for years celebrating the series in the stadium and at home through social media. As Jeff Pinkertson, a senior researcher at the Mid-American Regional Council said, “Every game truly has been like a three-hour commercial for our home town.”

No matter how things turn out tonight, I’ll be proud of how far Kansas City has come, and I look forward to new things to come. Thank you to the players and the Royals organization for an amazing ride. We’ll be cheering for you in Manhappiness!