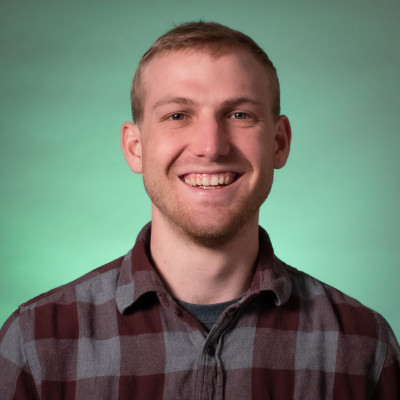 A sports-loving film buff with a predilection for storytelling, video producer Nick Patterson relaxes by walking the Konza Prairie and documenting family moments. Marveling at the number of fiery balls of gas filling up the universe (“There are roughly 10,000 stars for every grain of sand on Earth. Crazy.”), he draws side-eye from some of his fizzier colleagues for his disdain of soda (“All of it is gross.”).

Renowned in his social set for earning 40 bucks cash-money for streaking down a road at night and slapping a perfectly innocent mailbox, Mr. Patterson’s parents prefer he be called “Nicholas” (although they may not be calling him much at all after the streaking revelation). He contends that “the best animal to be in a Hunger Games situation would be a hippo. Big, ferocious, amphibious — a hippo would be a dangerous animal.” Joining several colleagues in his affinity for Harry Potter, sushi and LOTR, Mr. Patterson is appreciated by them for his imaginative video productions and willingness to bring nachos to work.

Lamenting dirty dishes and messy kitchens (“My siblings and I were in charge of cleaning up after dinner and it’s affected me as an adult.”), Mr. Patterson has met some big names including Garth Brooks and Ed Sheeran, although this Broncos fan’s preferred walk-up tunes lean more Abba.

Be pals with Elmer Fudd or Bugs Bunny? Elmer Fudd, because neither of us can say our R’s well.

Vacation in the mountains or at the beach? Mountains.

Go without cheese or go without bread? Cheese.

Never be stuck in traffic again or never get another cold? Cold.

Have unlimited sushi for life or unlimited tacos for life? SUSHI.

Attend the Oscars or the Grammys? Oscars.

Hang out with Lebron James or Leonardo DeCaprio? Leo. Lebron would get annoying quickly — he’s a bit of a drama queen.

Be a famous singer or a famous actor? Singer.

Have invisibility or the ability to fly? Fly.

Learn a new instrument or a new language? Instrument.

Drink only coffee or only tea? Coffee.

Touch a snake or touch a tarantula? Tarantula.

Adopt 10 cats or adopt 10 dogs? Yes. (Dogs and cats each have their strong points.)

Be too hot or too cold? Too cold.