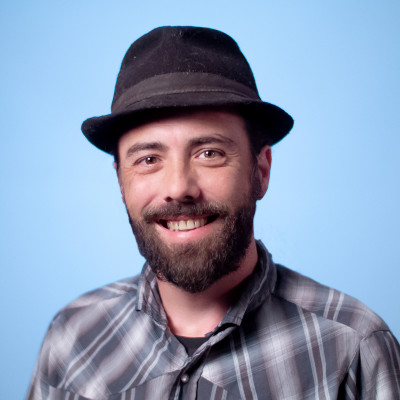 Obsessed with his family, DND and platypuses (“An egg-laying, poisonous mammal that is also a marsupial? I’m here for it.”), video production assistant Kyle Griffith says his friends and family would describe him as “weird and outgoing,” although his colleagues much prefer “diligent, creative and completely even-tempered” (an attribute previously lacking in the office personality mix).

Steadfastly maintaining that Firefly was the best show ever made (“I’ll fight you on that.”), Mr. Griffith doubled down on this position by naming two of his kids after characters. Not one to shy away from indulging a really bad impulse, as a youngster he once excavated a package of hot dogs he’d buried five years previously, with predictably stomach-heaving results. Demonstrating excellent taste in music (“Stairway to Heaven, yes. Baby Shark, no.”), Mr. Griffith shares Lisa’s disdain for left-lane slowpokes (“I swear like a sailor when that happens.” As does Lisa.)

This unicycle-riding drone videographer contributes extensive experience (as well as questionable joke-telling ability) to the team, bringing a meticulous eye and a somewhat unfathomable reverence for Pauly Shore to his work. His colleagues appreciate Mr. Griffith’s visual storytelling ability and his advocacy for allowing people to wake up anytime they please (although he himself shows up promptly each morning).

Learn a new instrument or a new language? Instrument. I could use that more.

Have to eat exclusively well-done steak or never eat red meat again? **panics** I guess I might as well never have red meat again. That’s not nice.

Touch a snake or touch a tarantula? Either — I have them both at home!

Be too hot or too cold? Too hot. Too cold is painful!

Read the book or watch the movie? It depends, but probably read the book.

Vacation in the mountains or at the beach? Mountains!

Have unlimited sushi for life or unlimited tacos for life? Sushi — it’s more expensive! I can make tacos.

Have invisibility or the ability to fly? Fly!!! Hands down.