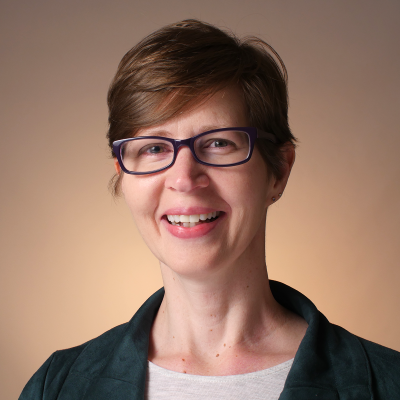 With a talent for planning road trips and a knack for playing the nose flute, director of digital marketing Julie Fiedler brings the data-wizard chops to her work — when she’s not fuming quietly about people who fail to clean up after their dogs, that is.

Obsessed with roasted beets and the smell of lavender, Ms. Fiedler claims to be a Monica/Chandler hybrid (her fastidiousness, his funniness). A published author of books for kids whose parents serve in the military, she can’t name her own favorite book (“There are just too many.”). She deplores the taste of molasses and drivers who exceed the speed limit by more than five miles per hour but applauds screwball comedies and Joe’s Kansas City Bar-B-Que.

Noting that the average worker bee only makes about 1/12th of a tablespoon of honey in its life, she’s a deadline-driven, delegating go-getter who could show those bees a thing or two. Disappointed that the majority of her conversations with her dogs are one-sided, she consoles herself with baking, drawing and needlepoint.

Live in a remote mansion or a high-rise city apartment? Neither. Too much cleaning for a mansion and not enough room for dogs in an apartment.

Visit Disney World or attend the World Series? Both sound horrible to me.

Explore outer space or the ocean? The ocean.

Sing karaoke or dance? (In front of a crowd.) Depends on how much I’ve had to drink.

Choose a vowel or a consonant? Vowels cost money and consonants are worth more in Words with Friends.

Touch a snake or touch a tarantula? A snake.

Vacation in the mountains or at the beach? The beach.