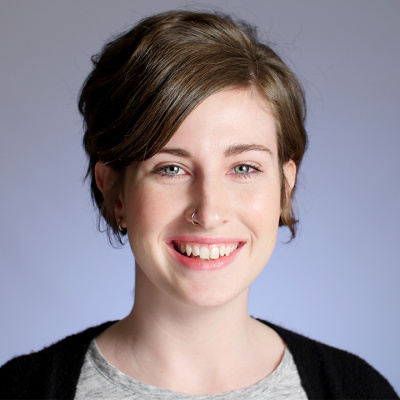 Despite her proclivity for leaving cabinet doors open and reluctance to eat around others, director of video production Erin Dryden is well-respected by her colleagues for her quick wit, mad skills in animation, filming and editing, and her ability to know exactly how a client should tell their story to the world.

Mrs. Dryden is not a fan of musicals (“I inherited that from my dad. The only one he likes is Sweeney Todd.”). If it were within her power, she would decree National Mystery Gift Day, on which we would all give a stranger a present for no good reason. She marvels at the vastness of the universe and mysteries of light speed, but despises lingering food particles in kitchen sinks and 80s hair band music. (“Don’t tell Susan. She’ll kill me.")

While she treasures a flimsy 2009 fundraiser program signed by fellow Missourian Sheryl Crow, she deplores road rage and goat cheese, and relates to the tendency cats have to nap in a warm spot.

Be able to talk to animals or babies? Babies — I think it would come in handy.

Ski or snowboard? Pretty confident I would fail at both, but I guess ski?

Be a unicorn or a dragon? Dragon seems more on brand for me.

Have invisibility or the ability to fly? Invisibility.

Have confetti drop or balloons released? Balloons, although I don't think that's very good for the environment.

Have a personal chef or a housekeeper? Personal chef. I get a lot of satisfaction from cleaning!